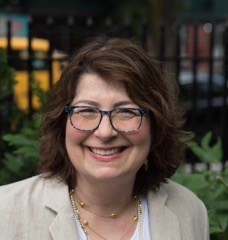 The Reverend Martin Luther King, Jr. in Letter from a Birmingham Jail argued that a substantial roadblock to achieving racial equality is the white ally “who is more devoted to ‘order’ than to justice; who prefers a negative peace which is the absence of tension to a positive peace which is the presence of justice.”

I am Rachel Lavine, your New York State Democratic Committeewoman for the 66th Assembly District, and I was about to send you a more traditional message, listing my accomplishments and asking for your vote in the June 23rd Democratic primary.

But I now feel compelled by the protests over the last few days to write a different message;  right now, I want you to know what I believe and why.

Right outside our front doors the city is exploding with rage and sorrow. It sounds like a war zone and we see first-hand the energy and chaos of the protests: the thousands of mostly young protestors, their fear and their hope. We see the broken windows and the vandalism, witness mostly violent police actions against protestors, peaceful and non-peaceful alike. Very rarely, we see the police kneeling or marching in solidarity.

Watching the grief, pain, and fury expressed by protestors – and the violent response to it – I feel, like so many of you, heartbroken, enraged, and frightened. We are seeing, over and over again, the terrible consequences of Donald Trump’s election to office.

That it is why, more than ever, I believe we must make serious, structural change in our country beginning with the defeat of Donald Trump, but continuing with widespread reform of our economic, justice, social service, and healthcare systems.

That is why I am proud of my work on the New York State Democratic Committee:

From fighting to make the our party support an Obamacare with full funding for reproductive rights – including abortion, to winning a moratorium on fracking in New York, and, most recently, to helping win the current progressive Democratic majority in the New York Senate by requiring that our state party no longer support any Democratic candidate who was a member of the so-called Independent Democratic Caucus. This new Senate majority, including our Senator Brad Hoylman, has passed numerous progressive laws regarding rent, unemployment, and COVID-related services which are now a literal lifeline for New Yorkers.

We can only make New York and our country the fair and just place we all believe in through a unified effort. The Reverend King did not say a “perfect” peace, because no such thing exists. He exhorted us to work for a positive peace – and that is what I have tried to do in my role as your New York State Democratic Committeewoman. I ask for your vote in upcoming Democratic primary on June 23rd, so I can continue to do so. You can register for your absentee ballot here:
For a Positive Peace, Respectfully,

Notice how Republicans have no ideas of their own, besides raze, burn & profiteer. "Applying Ruth Bader Ginsburg’s nickname to Amy Coney Barrett is deliberately degrading." https://slate.com/news-and-politics/2020/09/notorious-amy-coney-barrett-contempt.html via @slate